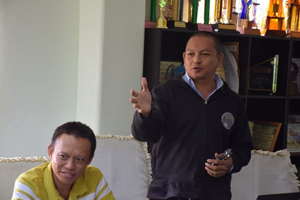 The tiniest snail in the world might be located in the mountains of Argao, Cebu.

This possible discovery is one of the accomplishments of the DOST-funded project, "Flora and Fauna Assessment Using Permanent Biodiversity Monitoring System in Cebu Island Key Biodiversity Areas (KBAs)," under the Niche Centers in the Regions for R&D (NICER) program.

Aside from possible new species of land snails and micro mollusks, the project team discovered a new island record of the Northern Temple Pit Viper (Tropidolaemus subannulatus) and Itom-itom (Diospyros longiciliata Merr). The team also discovered new foraging adaptation for tube-nosed fruit bat. According to Dr. Malaki, this fruit-eating bat turns out to be a leaf-eating bat as well.

The project is expected to end in December 2020 with four faunal and four floral guidebooks (1 guidebook per KBA), database of flora and fauna in their selected study sites, forest land use plan, trainings on biodiversity/mapping/assessment, and policy reports for LGUs.

Other News from Region 7

This course is intended to provide businesses in the food industry sector the necessary knowledge and skills on the fundamentals of Hazard Analysis and Critical Control Point (HACCP). HACCP is a sy...   read full story