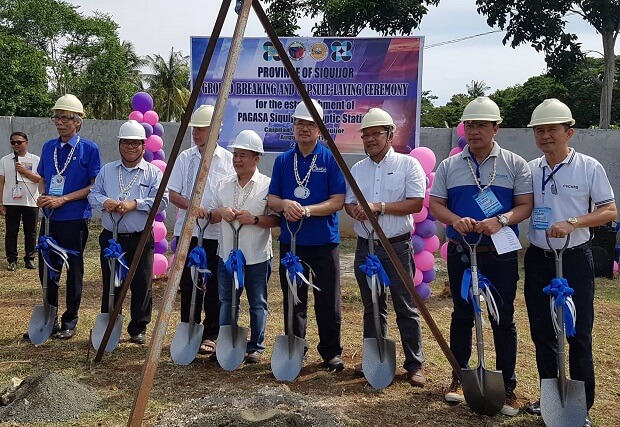 DOST secretary Fortunato dela Pena (center in blue shirt) leads the groundbreaking and capsule-laying for the establishment of the Synoptic Weather Station in Caipilan, Siquijor

Ā“As in the past celebrations, the RSTW is also aimed at public awareness of science and technology and innovation as a tool for enterprise development and community empowerment,Ā” said DOST secretary Fortunato de la Pena.

Siquijor governor Zaldy Villa welcomed the celebration of the S&T week for raising awareness of how important S&T and innovation to the development efforts and initiatives of Siquijor.

With the expansion of its international airport and plans to establish an economic zone in the province, Villa said that developments in the area need all the help to improve services that would be aligned to sustainable eco-tourism.

According to Villa, Siquijor has dramatically lowered its poverty rate from 49% to 10% in the last five years but its inflation rate is still high because of importation of commodities.Ā

Her stressed the province needs facilities such as mills to produce its own feeds instead of importing them, which contributes to inflation. He added that S&T innovations in food production and manufacturing are a much-needed boost to the growing demands of both locals and tourist alike.

To address the needs of the community, DOST has extended various assistance to mango farms and in various fields such as energy conservation, cleaner production technologies, business incubators to start-ups, and scholarship for human resource development.

According to Edilberto Paradela, Region 7 regional director, there are now 60 SMEs beneficiaries under the Small Enterprise Technology Upgrading Program (SET-UP) of the DOST in the province of Siquijor.

At another event in the province, Dela Pena and PAGASA administrator Vicente Malano led the groundbreaking and capsule-laying for the establishment of the Synoptic Weather Station in Caipilan, Siquijor to monitor weather conditions and provide information for safety and control for the would-be operation of SiquijorĀ’s international airport.

Malano said the safe operation of the airport is highly dependent upon accurate weather information.

To maintain the influx of tourists in the island-province, the provincial government is also bent on transforming Siquijor from being a mystical island to a healing island that would entice more tourists.

Towads this goal, the DOST, in partnership with Central State University, documented the traditional knowledge and practices of local healers in the island to ward off the impression of Ā‘SiquihorrorĀ’, which Siquijor is often referred to by outsiders due to the shamanism and witchcraft the province is known for.

Siquijodnons were also kept abreast by the DOST with the geological stability of Siquijor and the meteorological warnings and emergency response to hazardous weather events.

According to Phivolcs, while residents of greater Manila is bracing for the Ā“Big OneĀ”, Siquijor is probably expecting a bigger one Ā— an 8 to 9 Intensity earthquake Ā— based on the geological data of the province.

The provincial government was advised by Phivolcs to prepare for any contingency and for the LGUs to identify possible evacuation centers and intensify their campaigns on safety and protection.

Other News from Region 7